skip to main | skip to sidebar

Yay! It’s Farmer’s Market season! Be sure and stop by and enjoy the music.

Otis Gibbs is coming home for the release of his newest album, Joe Hill’s Ashes, and I couldn’t be more excited. The record has already spent time on the Euro Americana Chart -- it is currently at number two, right behind fellow Broad Ripple guy, John Hiatt. 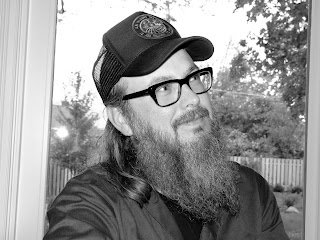 Otis is a folk singer-songwriter in the Woody Guthrie, Billy Bragg and Pete Seeger sense. He writes heartbreakingly beautiful songs about tragic events and everyday observations. He is also a terrific storyteller – he is one of the few musicians that I’ve seen the whole room get quiet when he speaks.

The Vogue is opening early for this show and will kick us all out by 9:30 so they can get ready for their Saturday Dance Night. The show is early, nonsmoking and seated. I can’t imagine why anyone would not be there (unless they’re under 21).

I’ve helped work his merchandise table for the last two CD release shows and I wrote to him to ask if I could help with this one – it’s my not-so secret dream to be in charge of merch sales for a world touring musician. Come by and say hello and buy a CD or tee shirt while you’re there.

Soul Bus is awesome – the band is made up of some of the most talented musicians in Indianapolis. Even though the band could technically be called a cover band, they are not your dad’s VFW band. Often they’re covering the songs of one of band members and they always keep it fresh.

The vibe in Après Jack’s is grown-up without being stuffy. The food is good – I had a delightful grilled chicken and fresh fruit salad the last time I was there. You’ll feel comfortable alone or with a group. Insider tip – Dave Murray almost always has a stash of chocolates on him. Just ask.
There is music almost every night – you can check out the calendar on their Web site. See you there!

Urban Element is a great place for dinner and drinks and it will be even better on Friday, May 7. Chicago’s Shelley Miller has not played in Indianapolis for five years. In that time she’s recorded two critically acclaimed records and made a name for herself teaching guitar and songwriting lessons at the acclaimed Old Town School of Folk Music.


Shelley is a CATH coffeehouse alumnus and played the Midwest Music Summit in 2004, where she met fellow crashers-on my floor NYC musicians Dave Golden and Jeremiah Birnbaum. They did an impromptu Sunday morning show at CATH that was amazing and let to collaboration and friendship between the three of them – and goes down in CATH history as one of my favorite things.

Shelley also did something awesome when she heard that CATH was closing. She drove out of her way on tour to personally deliver a sweet note and made-me-giggle pink furry purse. Don’t you just love her from that story?

She is opening for Hoosier by birth, Liz Snavely. Liz is an urban folk, acoustic singer-songwriter (LVNMUZIQ) She has been playing out since 2006 and has logged over 300 shows in 25 states. Some of her influences include Tracy Chapman, Damien Rice, and David Gray.

It promises to be a fun evening!

I’m not quite sure why I wandered into Chad Mills’ last CD release show at Birdy’s in 2006, but I sure was glad I did. He brilliantly included a CD with the price of admission (as he is this time). I’m sure I would have bought one anyway after hearing him that night. Two Places @ Once has found a permanent home in the player in my truck and at some point I bought a second copy for work. (I can’t seem to remember to move CDs back and forth and I might possibly be the last person in the city to have an iPod – even my mother has one!). The record is perfect for singing along driving with the windows down and for my nonprofit office – and trust me – that’s a fine line.

I have not heard the new record, Make the Door, yet but Chad is really proud of it so I’m sure it’s wonderful. Jenn Christy will open the show and Finest Grain will play after Chad. Do you think anyone would miss me if I snuck out of my Red Key shift for an hour or so? 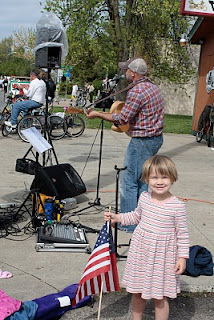 As disappointed as I am that I have to miss the show I’ll get to hear a little snippet as I walk the Mini Marathon route that morning. Chad will be playing in his usual spot in front of the Hi Neighbor Tavern. It is always fun to see Chad play and see his beautiful family nestled on blankets and in strollers among the Harley’s parked in front of the bar.

This will be a great show – put it on your calendar. Seriously.
www.chadmillslive.com
www.birdyslive.com

I’ll review all four of my record store stops for Record Store Day in the next issue.
Posted by nora leona at 10:49 AM 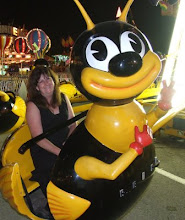 Queen Bee Music is a resource for musicians and music fans.
I managed and booked acoustic shows for CATH Inc in Indianapolis for seven years. I wanted to remain a cog in the "underground railroad" of touring musicians.

I write a regular column for the Broad Ripple Gazette, occasional music previews for NUVO, and features for Ghettoblaster Magazine.


Thanks for visiting!
Nora Spitznogle

See You In The Funny Pages